Ok. I admit it.  I’ve been slacking on the Tuesday updates, but I have been a very busy bee.   So instead of a Things We Love post today, I want to show you one of the things I’ve been up to.    Meet Pedro and Heidi.   They got engaged on New Years Eve and I finally made it down to San Francisco last weekend to take their engagement photos.  We visited City Hall and Golden Gate Park as well as some streets and a fountain.  They were great and it was a lot of fun.     The one almost hitch in the day was when the parking attendant asked us to leave our keys.  I was wondering if we would have a Ferris Buller moment but I got my car back safe and sound and the odometer was where it should be. 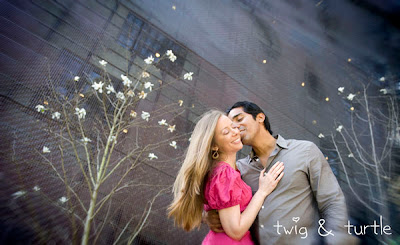 This photo is in Golden Gate Park.  The magnolia trees were blooming and were juxtaposed by the modern industrial look of the de Young Museum.  The building adds so much texture and color than just a blank sky could have.  It also really makes the magnolia blooms pop. I think this one may be my favorite. 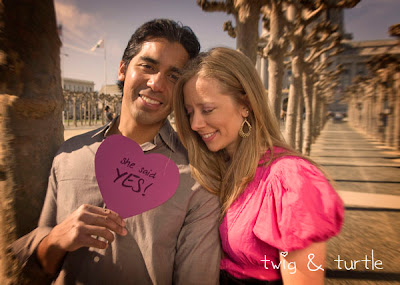 This one was taken out side City Hall.  There were tons of people lined up to audition for America’s Got Talent, but you can’t see them in the photos.  (That was on purpose.)  We also used a little heart as a prop.  Props can be great fun and can add a little extra to a photo.  I was so hoping for fog, but as luck would have it, when you want fog in San Fransisco you don’t get it. So because the sun was in the worst possible spot for the shoot I warmed the photo up in Photoshop and I think the color cast on the photo makes it look more like an old time postcard (and by old time I mean 50s-70s) or very stylized magazine shoot.  This look isn’t for everybody. 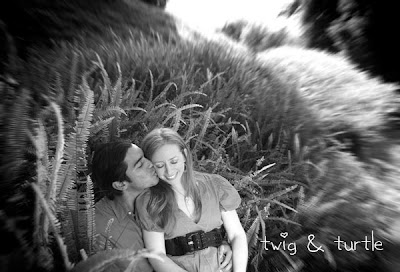 Here we are back at Golden Gate Park.  The sun coming through the trees was lighting every fern frond and the texture and color was amazing.  Pedro was such a good sport by squatting in a very wet place and letting Heidi sit on him.   His legs were burning at the end, but you would never know it by the look on his face. 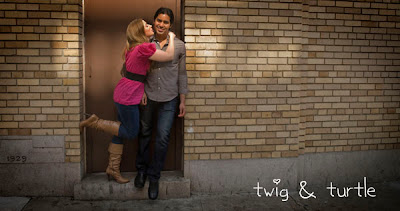 This last photo was on some random street in San Fransisco.   I saw the lighting and the doorway and thought, “Yep,  we have to stop!”  It’s the little details that will make your engagement or wedding photos extraordinary.  Little pools of lighting, that fleeting look, catching the wind in her hair at the exact right moment.  Pedro said he didn’t even look twice at that doorway.   That’s why it is so important to hire a professional.  Anyone can snap a photo, but the pros see light, texture and those little moments that others will miss.  So if you want your photos to be extraordinary,   you know what to do.  (Call me, that’s what you do!)